Hey guys! You are afraid to participate in the Secret Santa project because you won't be able to make/write/create a gift - you still can join by leaving a comment with your wish for Santa and you may get a brand new wallpaper.
Click the banner and leave a comment 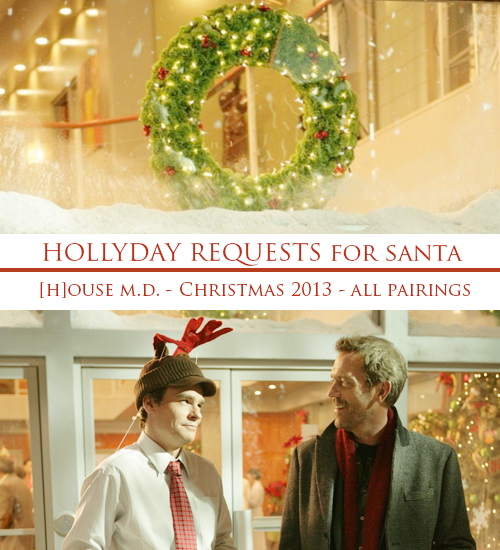 Lisa Edelstein tweeted a thank you for the Variety ad:

This beautiful gesture is beyond words! I feel incredibly appreciated-which in itself is a great gift. THANK YOU!

iwatchforlisae  has organized a paid 2/3-page ad to be put in today's "Variety Weekly," Hollywood's trade magazine, honoring Lisa Edelstein. I show here the online version of said ad, the full paper version and the list of contributors can be seen at IWFLE.

The next episode, Bombshells, is promising to be epic. The spoilers are coming fast and furiously. Here's a wallpaper I quickly made using a promo photo—thanks to "The woman I kind of like is out there in the moonlight caring about something stupid. This my chance to show her I care enough to act like I care about it too." Thirteen(to Foreman): "As soon as we touch, the blinds will open, and three annoying but lovable misfits will be staring at us." "Look at how handsome my face is. If all I wanted was sex, I could get it from plenty of women without having to go through all this crap."

"Someone make her a dude, so I can punch her."

"You think religion is stupid."

"No, no. To me, religion is like Paul Rudd. I see the appeal and I would never take it away from anyone, but I would also never stand in line for it."

"Well, then you should know that nothing says "I'm a woman" like... doing it with me."

"Did the Sisterhood of the Traveling Pants poison each other's food so they were too sick to leave? No. I've never seen it, but I'm pretty sure they mailed each other pants!"

"That's one of my biggest fears."

"You would eat yourself?"

"I wouldn't even question it."

Hey all! I was just watching Adverse Events on repeat and I was watching the scene when Lucas was fishing for info on Cuddy to give to House. He asks her what age did she lose her virginity. I wonder, since this inquiry was all really coming from House as Lucas acting as go between, does House believe that he might have been her first? We know she was an undergrad when she met him. I think they are ten years apart in age. So, she might have been 19 or 20 and he was close to thirty. I know most people lose it even before college, but I wonder if maybe Cuddy was a late bloomer in this respect.  It would explain why her initial attachment to him was so significant. Imagine losing your virginity to a guy you've been chasing around campus for a couple of months, and when you wake up the next day he's skipped town. She probably felt deeply hurt and betrayed because she thought he was 'the one.' Do you guys think that this might be an added reason she was so effected by his disappearing act? Also maybe House feels extra guilt thinking that he may have squandered such a precious gift?